Gestures can be expressed in one of two ways: small and light-hearted or showy and spectacular. Trust us when we say that nothing says spectacularly like a good old giant check. Sometimes, a big check can represent something showy and exciting (winning some cash on a game show) or a staple that something somebody has done is meaningful (think donating a large sum of money to charity). They're no doubt some of the more unique things people give out. Regardless, they are given out daily and have become a major part of our ceremonial culture. You can go here to order them cheap and easily online.

If you’re out trying to find yourself a nice big check then one of the most important things you’ll need to have is a sense of size. Really though they're just gator boards with a giant check mount. Turns out big checks are quite multivariable in regards to how big or small they can be. Thickness, weight, what event they’re meant for, and material are also factors that come into play.

The most popular size of all is typically the 24 x 48 inches, big enough to still be showy (it's 2 feet by 4 feet, which is still sizable) but small enough to be cost effective. Speaking of which, the most inexpensive sizes tend to be the 18 x 36 inches cheques. These are most commonly used for small ceremonies or child charities. They are big enough for a child to hold without much difficulty.

But if you’re looking for big and showy then the 30 x 60 inch and the 30 x 72-inch cheques are able to carry a whole lot of digits so if you're ordering for the next lottery winner this may be for you. Smaller checks tend to be made of lightweight materials, often not being solid while larger checks tend to be made from foam and have a considerable thickness. If it’s being held by multiple people, a flimsy check will still look good for the camera. If not, you’ll want to get the ones made of more stable foam which gator boards are perfect for.

Big Check History and Where They Came From

Where and when did the big check even become a thing? Since the beginning of American currency, any material could be used as a check provided the correct credentials. In some instances, throughout history, this even meant using the backs of fruit. As long as the banker can read the check, it can be cashed. But the check itself dates back way further than the American bank. 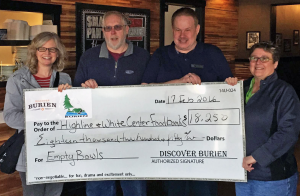 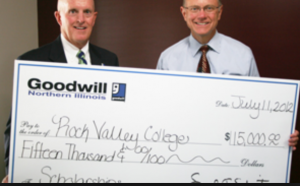 The Romans, often being credited as pioneers when it comes to money, were the first to ever create checks. Carrying a lot of money over long distances was very dangerous in Roman’s expansive empire. Instead, they would inscribe the value on checks that represented the large sums of money placed elsewhere in the empire. It wasn’t until 1700s England however that the standard, reliable, and exchangeable check we know today came into fruition. Now where banking is involved, the big check is still obviously a viable exchange of currency. But it is really about a lot more than its actual value. It’s all about showiness. That’s why the first photographed picture including somebody receiving a big check was taken of Joseph Goebbels, minister of propaganda for Adolf Hitler in the Second World War where he received 200,000 Deutschmarks.

The big check in this context makes sense when it’s being handed to somebody who crafted the public image as a job, as the big check signifies that the transaction being made was important. Since then, large checks have been presented for more pleasant occasions ranging from hospital openings to massive sums of money being donated to charity to winning equally large sums of money. It wasn’t until the 1980s however that it became synonymous with the idea of “winning money”. Publisher’s Clearing House was the first to send out giant checks to the winners of the many contests they would hold annually. They would bring the checks to the winner’s front door and the reactions would then be recorded and posted in the newspaper the next day. That’s what the big check is all about, showing that whatever the transaction, it’s important and everyone witnessing said transaction has got to know it.

When to Use Them

The big check is meant to symbolize the significance of a transaction, so it’s probably not hard to imagine what types of events they would be presented at.

The biggest and most obvious scenarios are big donations. Regardless of the motivation behind it, big checks are a good way of motivating people to donate. You give a big check, maybe get a photograph taken of you, and the world recognizes your efforts. It’s also a good way of thanking somebody for their contribution. It offers recognition for your efforts which is why they’re so prominently used at charity events. 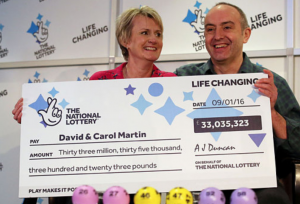 Also mentioned previously, they can signify that you have won something big, which is why they’re often used for lotteries. Using big checks does two things: one, it instills a great sense of officiation and joy in the winner and two, it advertises the prize itself to others. When people see a lottery winner holding up a huge check reading 10 million dollars and a look of pure joy on the winner’s face, it encourages others to buy lottery tickets. Because of its showy nature, it’s also a great marketing tool.

Game Shows or Anything Showy

Speaking of winning money, it’s of course often used on game shows. Spin a wheel and get $100,000. Here, the big check is also for functionality purposes. Of course, you can’t actually have $100,000 of cash given to the winner, and you can’t just give a small check because the audience at home won’t be able to see that. So a nice giant check does the job quite nicely. It also makes it great for presentations, since it's very showy and "extra" - it REALLY stands out. Celebrate these occasions with us!!

In short, the big check is the result of our primal desire to show off. Big and shiny is nice, but bigger and shinier is better. Order your giant check here!

Product was added to shopping cart