Billboard Marketing - Is It Still Alive and Thriving? 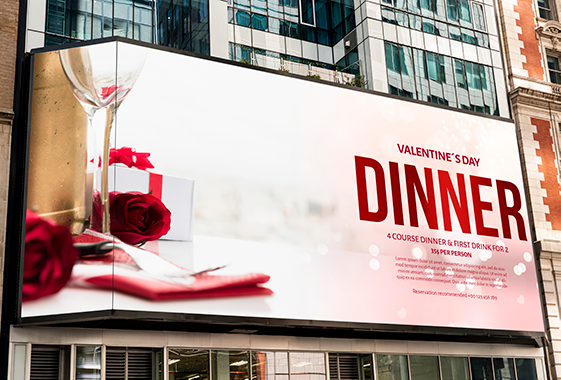 Of course, there's no denying that new marketing techniques pop up practically every day. Moreover, as much as people seem to be glued to their smartphones, the reality is people actually do look up sometimes. Similarly, whatever tomorrow brings, traditional marketing platforms are still here and find ways to adapt and stay relevant. One of these conventional advertising or promotional techniques is billboard marketing. A prime example of banners/billboards changing with the times is the wealth of outdoor design opportunities. In other words, you have a variety of options at any given moment to choose from, including vinyl banner printing, custom bulletin boards, posters or custom canvas prints, painted product quality boards, larger than life trade show banners, pole banners, and more.

As briefly suggested, print vinyl banners and billboards are designed to be eye-catching and to grab the attention of people passing by. That said, billboards aren't small, and thus, are pretty much unavoidable. Furthermore, a lot of thought and strategizing are behind the locations of most billboards. Consequently, people are almost forced to look at these mesmerizing billboards, many of which are conveniently placed in high traffic areas where you essentially have a captive audience.

In addition to being large and captivating, billboards or custom banner signage has been around since the early 1800s. The very fact that this type of marketing is over 200 years old suggests that it works, and that it's only just getting started. Think about it; large-format banners still get people's attention and draw them to purchase certain products, visit web pages, take photos, and create hashtags. Alternatively, others spark discussion about current social and political affairs. Therefore, billboard marketing is a great way to supplement other campaigns or work in unison with a bigger, broader message.

Exposure to More Than One Audience

Another reason that billboards and high-quality outdoor banners/vinyl signage aren't going anywhere is that they reached the masses. Unlike Facebook ads, magazine spreads, or even notifications on your phone, billboards are made to reach a maximum number of people, plain and simple. Other forms of marketing are more concerned about reaching a target audience, or a small portion of people who, through likes or purchases, are now primed to look at your advertisement. In contrast, billboards don't have to try so hard. In fact, numerous studies have indicated that more than 71% of consumers look at non-Internet marketing banners or roadside billboards, even in today's world.

What's more, print banners or billboards are still one of the most cost-effective advertising tools around. With other advertising or marketing mediums such as TV, the Internet, emails, and so on, there are ongoing costs associated with getting your ad seen and keeping your message relevant. Billboards offer increased exposure at very little cost to the advertiser. Once a custom vinyl banner has been created or designed and installed, all that's left is a somewhat nominal fee to rent the billboard space. With custom email marketing, television ads, magazine ad spaces, or new media platforms, prices are constantly changing, i.e., you have to pay more for better time slots, more space, or further exposure.

Less Effort for The Target Market

As briefly suggested, billboard advertising or marketing reaches many people without exerting too much effort. As a result, anyone can see your ad. This means you don't have to be a tech whiz, a millennial, or someone with ample free time on the hands to see a billboard. Moreover, this implies that there's a strong likelihood that your target market is seeing your advertisement. Clearly, the same can't be said for other more contemporary forms of marketing and advertising.

Furthermore, with exposure to more than one audience, a stronger likelihood that you're reaching your target market, and the almost 'in your face' presence that billboards have, it makes sense that there's an increase in consumer exposure. Ultimately, by being exposed to custom vinyl banners or billboard marketing, practically every time you step outside means you're regularly being exposed to specific ads or marketing strategies—so much that you may even have subconsciously memorized them.

Last but not least, when correctly done, billboard marketing has a strong visual appeal. Likewise, the same can be said for vinyl banners or signage when it's designed properly. Of course, this doesn't take away from the ongoing debate about how non-Internet marketing isn't as engaging as the advertisement you see on TV or while browsing the web and social media platforms. However, there's still no denying that billboards have an impact on consumers and people alike. Plus, there's nothing stopping print vinyl banner signage and billboards from having engaging supplement campaigns.

Thus, as you can see, billboard marketing and print banners are very much alive and have an important place in the wonderful world of marketing. At the end of the day, billboards will continue to be an affordable and effective way to reach the masses. One might even say that outdoor marketing and advertising both have bright futures ahead, each filled with bolder designs and supplement campaigns that will only strengthen their presence over time.